News note on measles outbreaks across the Pacific Islands

News note on measles outbreaks across the Pacific Islands

SUVA, 19 November2019: UNICEF is supporting the Government of Samoa to respond to a measles outbreak in the country. The Government of Samoa officially declared a state of emergency on 15 November 2019, four weeks into the continuing measles outbreak with more than 1000 suspected cases so far. The epidemic has claimed the lives of 14 children under-five years old and one adult.

Measles outbreaks were also declared in the Kingdom of Tonga on 24 October and in Fiji on 7 November. As of 5 November, 177 cases have been confirmed in Tonga with no deaths. In Fiji, the four confirmed cases and one suspected case were contained in one specific area of Namosi and Serua Subdivision, west of the capital of Suva. 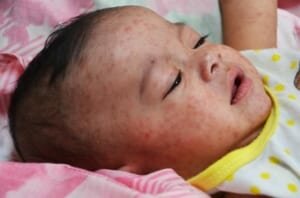