A Glimpse of Things to Come?

Bangladesh, with a population of 167 million, has recently emerged from being classified as a low-income country to a low-middle-income country and has made some progress in poverty reduction. However, in Bangladesh, mortality among children younger than 5 years is 33 per 1000 live births, life expectancy at birth is 72 years, and the most common causes of premature death are neonatal disorders and stroke.1 The annual per capita income is US $1316, with approximately 15% of the population living in extreme poverty.1 Dhaka, the capital, has a population of more than 20 million and is one of the most densely populated cities in the world. Dhaka is also considered one of the most environmentally contaminated cities in the world, yet for some of the increasing population of rural poor, it is a highly attractive place to live. For those living in rural areas, available land is decreasing because of overpopulation and climate change, and for some, the ground water is contaminated with arsenic. Given the struggles in their lives, people come to Dhaka by the thousands each week. With limited education, skills, and financial resources, most of these migrants end up living in a slum. Is this a glimpse of things to come in resource-limited countries? 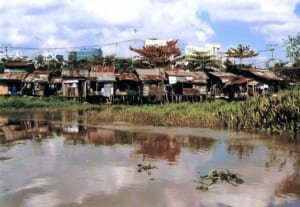 Image by Thomas G. from Pixabay