A new study has pinpointed a strain of Escherichia coli in poultry meat that could cause serious urinary tract infections (UTIs) in humans, a multicenter team of researchers reported today in the journal mBio.

After analyzing thousands of E coli samples from retail meat products and human urine and blood samples collected over the course of a year in a single town, the researchers concluded that E coli ST131-H22, a sublineage of a pandemic, multidrug-resistant E colistrain that has caused serious UTIs worldwide, is prevalent in chicken and turkeys meat and could be responsible for a small percentage of human UTIs.

“Our results suggest that one ST131 sublineage—ST131-H22—has become established in poultry populations around the world and that meat may serve as a vehicle for human exposure and infection,” the authors wrote.

The researchers were able to identify the strain, and the links between the bacteria in the meat and human samples, by using whole-genome sequencing and analysis of mobile genetic elements. They believe that this method could help uncover other E coli strains causing extra-intestinal infections in people.

Foodborne E coli infections linked to contaminated meat products are frequently associated with intestinal illnesses, like diarrhea. Foodborne illness outbreaks caused by these Shiga toxin–producing E coli (STEC) are carefully tracked by the Centers for Disease Control and Prevention and receive a great deal of attention in the media.

In recent decades, however, researchers have been documenting UTIs caused by E coli that also appeared to be linked to exposure to food-producing animals. But how often this is happening, and what particular strains of disease-causing E coli have been passing between animals and humans, has been less clear. That’s what the team led by Lance Price, PhD, director of the Antibiotic Resistance Action Center at the George Washington University Milken Institute School of Public Health, wanted to explore.

“We wanted to design a study to quantify how often bacteria are moving from food animals through food and into people, and the bug that we started with was this really important strain of E coli,ST131,” Price told CIDRAP News.

Since emerging in the 1990s, E coli ST131 has become the most important antibiotic-resistant uropathogen circulating in hospitals because of its virulence, ability to spread from patient to patient, and growing resistance to multiple classes of antibiotics. Price estimates that ST131 could cause up to 10,000 deaths a year.

Previous studies have not found strong evidence of foodborne carriage of ST131. But as Price explained, much of the research has focused on a particular sublineage of the strain, ST131-H30. Price and his colleagues, who’ve extensively studied ST131, wondered if other ST131 sublineages might be found in both humans and animals.

Sequencing provides evidence of a link

To answer this question, over a 12-month period they collected bacteria from 1,735 positive clinical urine and blood cultures and 2,460 samples of poultry and pork meat from a hospital and several retail grocery stores in Flagstaff, Ariz. Using meat and human clinical samples taken from the same geographic location over the same period, they felt, would give them a better sense of the potential for foodborne transmission. Overall, E coli was found in 72.4% of the human samples and 81.7% of the meat samples.

The team, which also included scientists from Northern Arizona University, the Translational Genomics Research Institute, the University of Minnesota, and the University of Washington School of Medicine, then sequenced the E coli isolates to identify the different strains. ST131 was the most common sequence type in the human E coli samples, accounting for 15.3% of the isolates (182 of 1,188), and the 13th most common in the meat samples (25/1,923, 1.3%).

Drilling down further to explore the relationship between all of the ST131 isolates, the researchers found four sublineages of ST131. Nearly all the meat isolates (24/25), mainly those from chicken and turkey meat, belonged to ST131-H22, as did 13% (24/182) of the human isolates, some of which were from serious infections like pyelonephritis, a severe infection of the kidneys. A close look at the “evolutionary tree” of the ST131-H22 isolates revealed tight clusters of genetically similar poultry and human isolates—an indication that they had come from a common source.

Price said this was the first part of their “aha” moment. “We showed that there’s this one lineage of ST131 that we see in poultry, and we also see people carrying this sublineage,” he explained. “And it turns it’s out it’s also an important cause of human disease, based on the fact that we’re finding it in people with serious infections.” 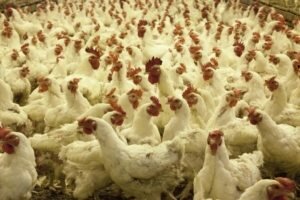 A historical analysis of the ST131-H22 lineage concluded that it’s likely been circulating in poultry flocks since the 1940s, which suggests there could have been countless occasions in which the strain spilled over into humans. But those spillover events are potentially more serious now, given the levels of antibiotic resistance the researchers found in the ST131-H22 isolates carrying the ColV plasmid; 80.9% of the meat isolates and 33% of the human were resistant to more than three antibiotic classes.

An analysis of an international collection of ST131-H22 genomes also identified 22 more human isolates carrying the ColV plasmid, which suggests that poultry-to-human transmission is occurring elsewhere.

Melha Mellata, PhD, a microbiologist at Iowa State University who studies the zoonotic potential of foodborne bacteria and was not involved in the study, said the findings are significant because foodborne extra-intestinal pathogenic E coli (ExPEC) have been underappreciated as a source of human infections. “It is difficult to link ExPEC to human illness because these E coli could live in our gut for months or years before they find an opportunity to cause infections beyond the gut,” Mellata explained in an email.

“So, even if you eat food contaminated with these E coli, causal relationship with diseases is hard to establish.”

Mellata added that she hopes that studies like this one, along with her team’s research on the extra-intestinal disease risks posed by E coli from chicken, have shown enough evidence that ExPEC can be foodborne. “This will help develop strategies to prevent their transmission to humans, which will improve human health,” she said.

One limitation of the study is that it did not include any epidemiologic follow-up to determine what the patients who provided the clinical samples may have eaten, or where they purchased their meat from. Nor could the researchers definitively determine whether individual infections resulted from direct exposure to contaminated meat.

While Price said he has more faith in molecular models to document the link than in people’s ability to recall what they ate, he suggested a good follow-up would be to design a study where researchers can contact people with documented UTIs caused by ST131-H22 and ask those questions.

For now, the next step for Price and his colleagues will be to document what other foodborne strains of E coli are causing UTIs. “The next thing we really need to do is to quantify the total E colipopulation that’s moving from food animals to people,” he said.