The ultra-fine particles (UFPs) are produced by fuel burning, particularly in diesel vehicles, and higher exposures significantly increase people’s chances of getting the deadly cancer. Previous work has shown that nanoparticles can get into the brain and that they can carry carcinogenic chemicals.

Brain cancers are rare, and the scientists have calculated that an increase in pollution exposure roughly equivalent to moving from a quiet city street to a busy one leads to one extra case of brain cancer for every 100,000 people exposed.

“Environmental risks like air pollution are not large in magnitude – their importance comes because everyone in the population is exposed,” said Scott Weichenthal, at McGill University in Canada, who led the study. “So when you multiply these small risks by lots of people, all of sudden there can be lots of cases. In a large city, it could be a meaningful number, particularly given the fact that these tumours are often fatal.” 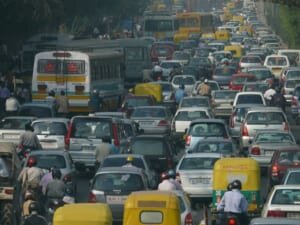